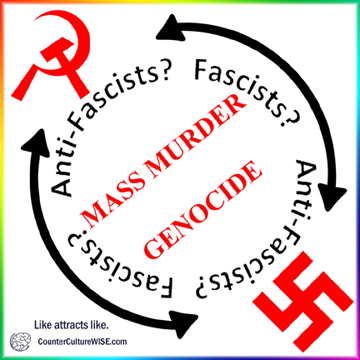 Just making sure that’s out there – because pointing out the obvious seems to be mandatory for any public declarations these days. Do you know why I must state that? For stating the following: I am not a Communist.

See, the political climate has emboldened half-wits with positively no knowledge of history to honestly believe that you must be one or the other. This is insane.

Both are evil. Both have no place in the U.S. or any civilized society. Both lead to control and murder. And, yet… anyone who publicly states they are NOT pro-Antifa or did NOT vote for Hillary are immediately labelled as Nazis. Even if they are gay Jews or black themselves, they are somehow white supremacists. Welcome aboard the Crazy Train.

So, what we end up with are a bunch of brain-washed, violent racists who are fighting violence and racism by being violent and racist. Told you it was off the rails.

If you are against fascism, racism, government control, mass murder, and the quashing of personal freedoms – well, then, by definition you are against both of those ideologies. It is simple, frankly. Look it up if you are not familiar with the history.

Anyway, I gotta get back to my goose-stepping or flag waving or boot shining or whatever in the hell Nazis do. I have no clue…

By the way, I am amazed at how timely this old song’s lyrics are…