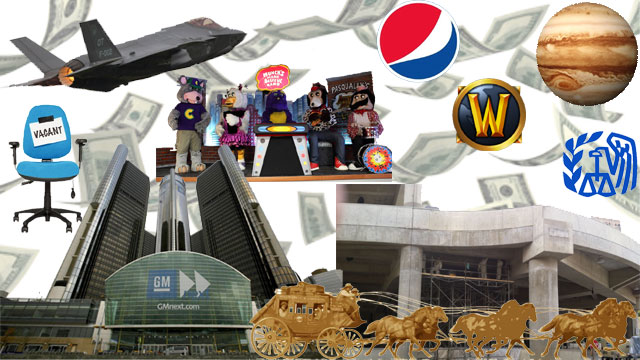 That whiney, incessant wind-tunnel sound you are still hearing after a full year is actually escaped expletives from the Democratic echo chamber as they continue to try to convince us Plebs that $4.1 billion is too much for border security. Keep in mind, these are the same folks that rallied around Obama when he spent $2 million EACH to train “moderate” Syrian rebels to fight against ISIS. That program was so successful that it was shut down after training 145 of ‘em, and only 95 who actually went back to Syria. …and ISIS was doing still just fine when Bummer left office, thank you. (Where did the rest of the trainees go, and how much is that costing us?) But I digress…

God forbid a businessman with experience in construction should be in charge of a construction project — not when soft, government teat-sucking hypocrites know so much more than the rest of us idjuts.

Most of these mental elites — I’m talking to you Bernie — have literally never had a job in their entire lives and would not understand the words “constructive” or “earned” if you spelled it out for them in interpretive dance. #maga #buildthewall

Of course, this (and RUSSIA RUSSIA RUSSIA) is the focus while the Dems sit for the flag, boo jobs for their constituents, harass and rape each other endlessly, and spit on murder victims because they are too white to count toward their agenda. It’s all about priorities, folks.

So, in honor of their concerns, let’s take a look 10 projects that our government felt we SHOULD pay for instead. Keep in mind; this is just a tiny taste. Ha. (You’ll get the funny when you read #6)

TARP cost us taxpayers $700 billion — to start. The total so far is $12.8 TRILLION, and climbing. They aren’t being watched with our money, and they have not fixed the problems that caused this mess in the first place (just search for Wells Fargo on any given news day to see the fine, upstanding citizens our stolen monies are going to assist). I guess that’s why it takes my paychecks 5-7 business days to go into my account, but my power bill 5-7 minutes to come out.

We…no, our “representative government” wastes $123 billion ANNUALLY on programs that fail to impact the populations they serve. Fail. To. Impact. What the hell are they doing? Honestly?

Oh, and add to that $25 billion ANNUALLY to maintain vacant federal properties. Those really, really affect no one except us taxpayers. Nice. How about we just move the immigrants into these vacant sites and lock the doors? No, that’s just mean. Ooooh, better… we could house ALL OF OUR OWN HOMELESS VETERENS. That would be a program that impacts the population we should be serving. Too logical? Sorry…not sorry.

$406.5 billion of our tax dollars later and we still don’t have a neato fighting jet. What’s worse, if they do actually ever get built, it will cost more than $1 trillion just to maintain them. IF they ever get built.

It irks me when folks who think our country is a democracy (it’s not) whine about the issues caused by having capitalism (we don’t). Here is another fine example of the difference between capitalism and corporatism: the recorded $11.2 billion loss in the GM bailout. I guess it wasn’t too big to fail, after all.

Don’t worry, the company itself is showing profits. We just don’t get to benefit from them in any way. I mean, did YOU get a free truck or any of your money back last year?

Here in Las Vegas, I have seen entire casinos (and their new parking-fee monitoring systems) go up in mere weeks. But the Paul S. Sarbanes Silver Spring Transit Center in Silver Spring, M.D. is still under construction, and with no end in sight. It’s a freaking parking garage! Oh, and Pulte Home Corp. is now suing the government for $165 million, plus legal costs, for the delay.

The US government is currently shelling out $1 million PER YEAR for taste-testers of what they call the “Mars Menu” — you know, for that expedition that has not happened and will not happen for at least another 20 years? The purpose of the taste-tests is to ensure that the folks on the Mars mission (that isn’t happening, remember) won’t face “food monotony.” Boy that would suck, since so many of us taxpayers spent all eight Obama years subsisting on Top Ramen while wishing we could afford healthcare to cure our severe depression and malnutrition-induced obesity. Well, nothing is too good for astronauts that have not been born yet.

(7) IRS still can’t figure itself out

Rather than update their software each year, the IRS is spending $83 million to transfer 140 million taxpayers’ data from a program built in the 1960s. Hey, IRS — you know we enter all of that info every year ourselves, right? Rather than pay nearly $1 each to transfer each person’s data, why don’t you just have it go to the right place the first time — for free?

Oh, and keep in mind that this is the SECOND failed attempt. The first one cost us $37 million over budget (not sure what the budget was) to not get it done that time, either.

(8) Special favors for the second-best cola

In another prime example of corporatism vs. capitalism, Pepsi extorted $1.3+ million from the U.S. Department of Agriculture and the Department of Commerce to build a new aquifer-direct water supply system, a new road leading to their plant, and to improve the Genesee Valley Agri-Business Parks’ wastewater capacity. You know, since they are so poor they need extra help from us, the taxpayers, to ensure their solvency.

Aren’t you glad that $1.2 million from a National Science Foundation grant went to study seniors playing video games? Me either. What makes it oh-so-rich is that the findings were inconclusive, at best. While much controversy swirled around whether they actually played WoW, in particular, I propose that it doesn’t matter. I have never been paid to play Cookie Cats.

(10) Criminy – Chuck E. Cheese beat you to it, and theirs were cooler!

The Department of Defense — yep, the guys that SHOULD be building a damn wall — spent $2 million to pay musicians and researchers to develop music computers that can hook up to robots. No, really. The video is cool, but not on my dime.

The grown-up edition
Be her Valentine – Dog Abby