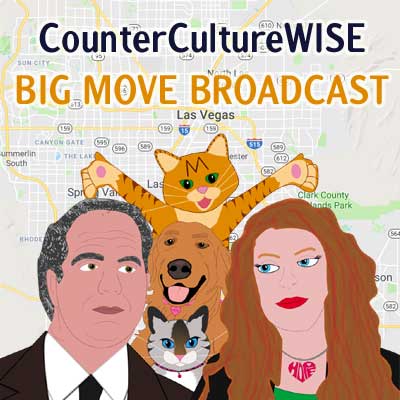 Welcome to the new digs!

We will not dwell on it here, but for long-time listeners who may be wondering what happened, we are just gonna give you the Reader’s Digest Version of what went down. Due to increasing philosophical, political, and professional differences with the leadership of our now-former network , we were forced out.

We had actually seen this coming, and had already committed to continuing the show. This put us in the proper mindset to stay positive and keep rolling! Once the split became official, Melanie went right to work finding a new platform for us. She found Spreaker. After setting everything up and running a test, we were nothing less than thrilled at the results.

As for Jim, he has increased his output of writing for CounterCulureWISE, and is coming up with great new ideas for future shows and videos. It’s amazing how liberating something like this can be!

For the first time, we fully own the show, and are committed to bringing you a better listening experience than ever.

Welcome to the new CounterCultureWISE!

This was a three-show week! Jim did his Bard at the Bar Thang at a new venue, Lovelady Brewing Company in Henderson. (Terrific people, and delicious beer. Check out their Paleo Porter…yum.) BatB have been asked to return there, so there will be future performances of Shakespeare’s work at both Lovelady and their original haunt, The Velveteen Rabbit. Stay tuned here for future events!

As for Melanie, she did an amazing job with her cohorts at Las Vegas Improvisation Players. If you are a fan of WHOSE LINE IS IT, ANYWAY? and are in Las Vegas on any given 3rd Saturday, check them out. It’s completely family-friendly (a rarity for improv groups in Vegas, or anywhere else).

…and that’s why we can’t have nice things

Kath Zhu stripped of her crown for being conservative

It goes as expected.  Plus…BONUS INTERVIEW ON THE FRITZ: Phrytzie interviews “The Squad!”

Real-life Florida Hamburglar cooks himself dinner after breaking into a Wendy’s, deputies say

Florida Man Eats Chicken Wings, Refuses to Pay For Them, Pulls Out His Penis

Couldn’t Happen to a Nicer Guy!

…Is Fatally Hit by Truck

Pinky Does a Victory Dance from Beyond

This wasn’t in Florida, but it was extra-fast food

What does a young man do about his girlfriend’s overbearing and attention-seeking mother? Abby’s response can be found here.

James 4 (entire chapter, referencing Proverbs 3:34) and Colossians 3:23 Put God first in your work and your life, and stop trying to outsmart Him, fer cryin’ out loud! Also, you are a gift from God. Yes, you too!

Blackouts and wine with Sarah Lawrence
Chillable, Not Chuggable! July 28 2019