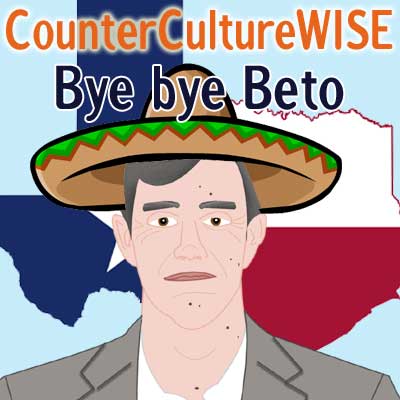 NaNoWriMo is in full swing, and Jim has (so far) kept pace to hit 50,000 words on his book by the end of November. Fingers crossed!

The big political news is that Our Favorite Fake Mexican, Robert Francis “Beto” O’Rourke is beginning his fade into total irrelevance as he abandons his candidacy for President of the USA. He gave a lack of funds and the increasingly long odds as his reasons, But whatever the reasons, he was not a Very Constitutional Guy, and we are not disappointed that he is gone. At CCW, we believe that the real reason he left was his final interview as a candidate, which happened to be with…you guessed it…Our own Mister von Regal Beezer.

The story of the squee

We review the origin in our lives of “The Squee,” and also discuss the previously unknown (by us) fact that “squee is a real, genuine, in-living-color dictionary-type word!

New York City Secretly Exports Homeless To Other US States, Paying For One Full Year Of Rent

Man makes engagement ring from a year of fingernail clippings

‘Bone Music’: The revival of making albums made from X-rays

Man attempts to open a bank account with $1 million bill!?

Billboard in London Encourages White People to Sterilize Themselves

A woman died from an explosion at a gender reveal party

Someone F*cking Changed the Classic “Alphabet Song,” and It’s So Bad, I Can’t Even Read Anymore

Al-Jazeera Says Not Wanting to Eat Insects is Racist

He set out to walk 351 miles to meet a teen girl, police say. She turned out to be an undercover cop.

FLORIDA MAN JUMPS OFF A SURFBOARD, LANDS ON A SHARK

Florida principal who told parent he ‘can’t say the Holocaust is a factual, historical event’ is fired

Florida man accused of leaving child, scared and alone in a haunted house for hours