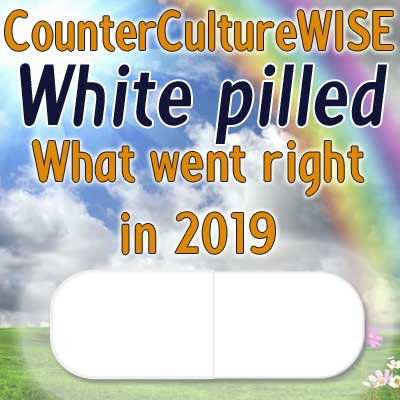 Welcome to the show…and welcome to 2020.

Melanie, Jim, Max, Phrytzie, Abby, and little Maizie want to thank you for making 2019 such a great year for our little enterprise. We are looking forward to an even better 2020. In that vein, we started off our show in gratitude, looking back at the stories in 2019 that refute the Doom and Gloom that is so pervasive in today’s culture, and being peddled by the mainstream media. Are ya ready? let’s do this.

NASA Says Earth Is Greener Today Than 20 Years Ago

October 17
After being pushed close to extinction, this humpback whale population is making a comeback

R.I.P. to the great Jack Sheldon, the musician and singer who was featured in several Schoolhouse Rock segments of our youth, most memorably “Conjunction Junction” and “I’m Jut a Bill.” He also served a bandleader for the Merv Griffin Show for many years.

Our friends Eric and Jayne Post, creators and stars of Marriage Can Be Murder, and Adam London, creator and star of Laughternoon, whose long running shows at the D Hotel and Casino ended today. The casino is converting the D Theater into a Sports Book area. But fear not! Both shows are going to new homes. Jim wants to thank Eric and Jayne for the great experience of being in MCBM, and Adam for simply being a great guy and an amazing talent. Onward and Upward!

Believe us, we were not going to discuss politics at all this week . Then Julian Castro quit his campaign for president right after his interview with Max. Coincidence? Listen and decide.

We also felt obligated to discuss President Trump’s drone attack that killed Iran General Qasem Soleimani, but Phrytzie, bless her chubby little heart, made it clear she wanted to do the commentary. We relented, and she gave an impassioned plea on behalf of…well, once again we ask that you listen and decide.

Ricky Gervais OWNS the audience at the Golden Globes-he is our new hero.

Only in Jersey: Traffic safety served up with a side of attitude, humor

Dog Leads Rescuers To A Box Of Abandoned Kittens, Then Becomes The Best Foster Dad

Sounds of the past give new hope for coral reef restoration

Police ‘waste’ £1.5MILLION on electric cars that they admit are useless for chasing criminals because they ‘can’t go fast enough or far enough without a battery change

He told police he was stabbed for being Jewish. Then his Apple Watch caught him in a lie.

Man accidentally shoots himself while trying to steal puppy

…and just for fun…

Man Gets a Tattoo He Found On His Pup, Not Knowing It Means He’s Neutered

Reporter quits job while live on air after winning lottery, but later discovers payout was about $5,500

Our wise doggie answers a sensitive question about becoming parents.